Yes, you read that correctly - the name is "Do'nt Give Up!" and the "typo" is intentionally there. This album is my humble tribute to my beloved and much-lamented mother who passed away earlier this year. 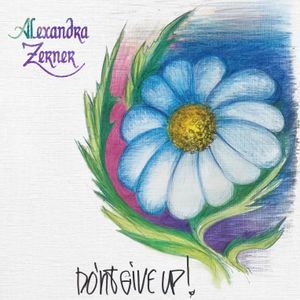 The artwork is a drawing that Mummy made for my 39th birthday. It's her favourite flower - the daisy - along with her motto on the bottom. She accidentally misplaced the apostrophe and wanted to redo the entire drawing but I told her to leave it as it is - I would rather have her genuine love interwoven in her drawing than a chase for perfection. That's why I named the album in this specific way.

The production costs and the shipping costs together are estimated to be a minimum of 3,500€ therefore this is the basic goal so everyone can have their perks.

Below are the items you can pre-order to help me cover the expenses. There are minimum prices for each item but you're free to pay as much as you want on top of that.

Most of the album is already recorded and the mixing and mastering will take place in October and November. Once the album is released, I will take care of the CDs which take time to produce so you can expect to have your items delivered 1-2 months after the release.

The release date of the album is the 23rd of November which is Mummy's birthday so I want it to be a gift for her, wherever she is...

A gratitude video, dedicated to you personally.

Your Name in the Credits

Your name will be added to the "special thanks" section on the CD packaging.

Q: When will the album be complete?
A: The recording process will be finished by the middle of October. Then the materials will be sent for mixing and mastering so the album can be ready for the release date - the 23rd of November.

Q: How can I contribute?
A: Pre-order a merch item and type any price that you would like above the set minimum. Payments are accepted both by card and PayPal.

Q: How do I get my pre-ordered items?
A: Once the album is released, everyone who pre-ordered an item will get a digital download on the email they provided in the order form. This is also applicable to the "Thank You!" videos. The CDs will be dispatched as soon as the manufacturing is done (this might take a month after the release).

Q: How will I know if you’ve reached your goal?
A: There is a progress bar on top. The album will be released digitally regardless of whether I reach my goal. If the pre-orders aren't enough to cover the production and shipping costs, the pre-order period will be extended until the goal is reached. All these checkpoints will be announced through email (mailing list signup is required).

Q: How can I share this with my friends who love your music?
A: You can use the share link next to every product or just copy the page link from the address bar and send it using your preferred method.